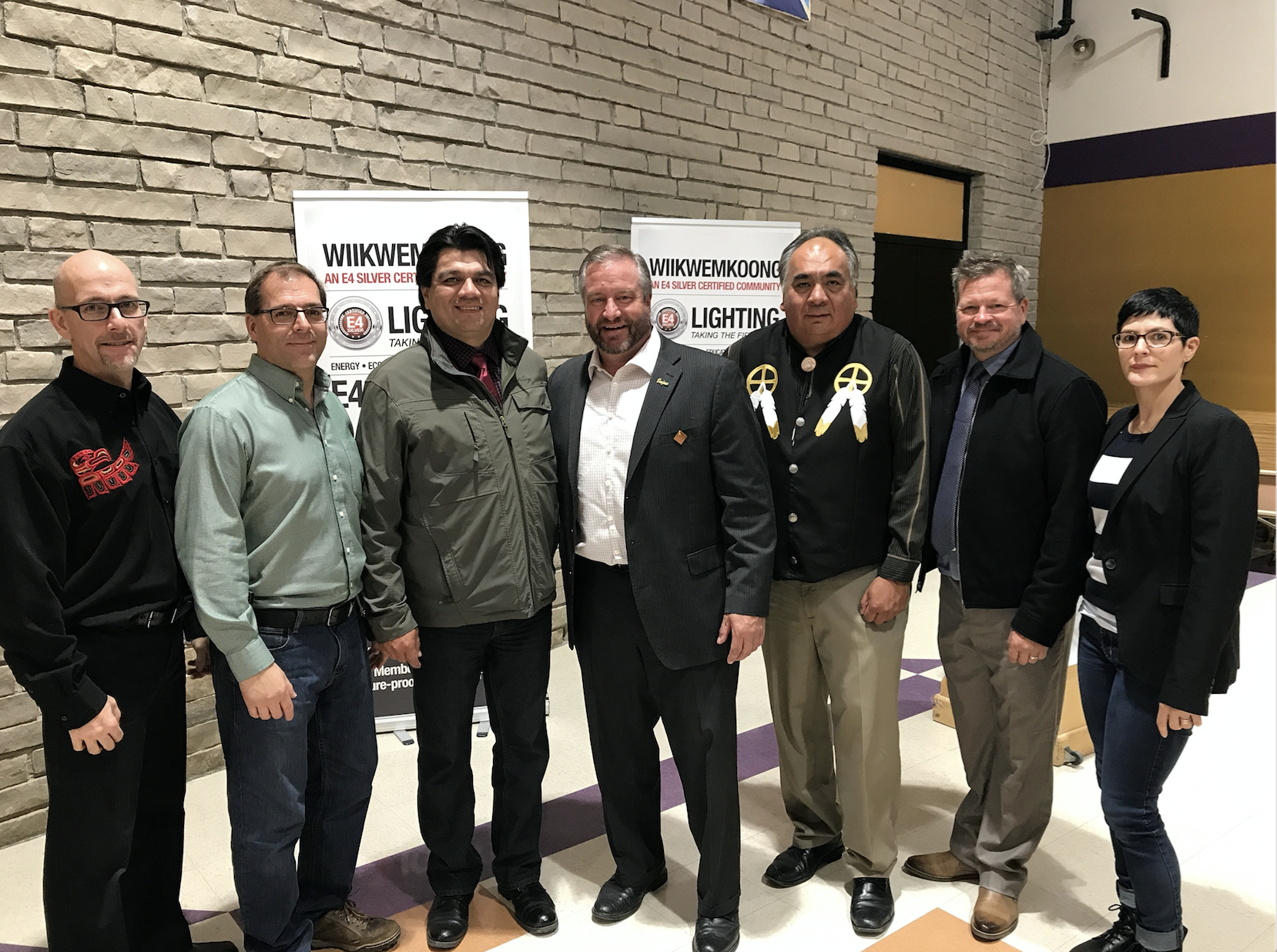 WIIKWEMKOONG—Members of the Wiikwemkoong community joined Ogimaa Duke Peltier, members of the Wiikwemkoong band council, officials from the provincial and federal governments, Hydro One and Ignite Infrastructure Program staff in a ribbon cutting ceremony celebrating the completion of Phase I of the first IGNITE First Nations Sustainability Program. Phase I will result in savings of more than $157,000 a year by reducing lighting energy consumption by up to 58 percent, money that the community can put back into services for its members. As part of the program, the band has installed LED lighting throughout its building stock.

Acting as emcee for the event, Wiikwemkoong Director of Operations Kevin Wassegijig noted that the community was “fortunate to be working with such great partners” before he introduced each of the speakers before the official ribbon cutting.

Wiikwemkoong councillor and elder Margaret Manitowabi opened the event with an invocation in both Anishinaabemowin and English.

“The Wiikwemkoong Unceded Territory is proud to be a part of the IGNITE First Nations Sustainable Communities Program,” said Ogimaa Peltier during his opening remarks at the ribbon cutting. “Our community can and should decide where and how investments should be made to best address our needs. Through this program, Wiikwemkoong is transforming the way we plan, fund and build the projects we need, to create growth and equip our community for a more sustainable and productive future. We are pleased that Phase I has been completed and look forward to further implementation of infrastructure upgrades for Wiikwemkoong.”

Ogimaa Peltier went on to thank the many individuals who helped move the project forward, including former Wiikwemkoong Chief Walter Manitowabi, a director of IGNITE First Nations Sustainable Communities Program, who also went on to thank Roland Kielbasiewiecz, founder of the program and president and CEO of Loraxian Inc., Cary Kokkonen, marketing and communications specialist, Leanna Karremans of the lobby firm Pathway Group, which handles media relations for IGNITE.

“Wiikwemkoong is leading the way for infrastructure upgrades and energy retrofits,” noted Mr. Manitowabi. That role is critical, he noted, as “the First Nations in Canada are in crisis with respect to energy costs and failing infrastructure. Existing government programming is just not available on a scope needed to address this escalating problem. The First Nations Sustainable Communities Program has been created to support First Nations in developing and implementing an innovative way of planning and investing in infrastructure upgrades accessing all available resources, including private financing. Wiikwemkoong has proven it can be done and we welcome all other First Nations to join the IGNITE movement.”

Although he was unable to attend the ceremony, Anishinabek Nation Grand Council Chief Patrick Wedaseh Madahbee sent greetings and congratulations. “I applaud the Wiikwemkoong Unceded Territory in exemplifying strong leadership,” he said. “Through the IGNITE program, Wiikwemkoong has taken meaningful steps to build capacity within their community to own, drive and determine the kinds of services they need. By advancing its self-determination, Wiikwemkoong is building a stronger, healthier and more sustainable community, while raising the quality of life for its people.”

“The Chiefs of Ontario supports Wiikwemkoong and other First Nations as they continue to build upon this new initiative and as they take leadership and control in addressing their infrastructure issues,” said Ontario Regional Chief Isadore Day. “We challenge all levels of government to be more aggressive in program development and funding to close the gap on the infrastructure and energy crisis facing First Nations. We look forward to working further with IGNITE, in order to address the needs of our communities in a meaningful way.”

Algoma-Manitoulin MPP Mike Mantha congratulated the community of Wiikwemkoong on the successful completion of Phase I and noted that a lot more work remains to be done.

“I would like to congratulate Wiikwemkoong Unceded Territory as you celebrate the completion of the first phase of the Wiikwemkoong and IGNITE Energy and Infrastructure Project,” said Minister Philpott in a letter read by Mr. Batisse. “I commend your community’s initiative in developing this energy saving project and leveraging important partnerships like the one you have forged through IGNITE’s First Nations Sustainable Communities program.”

Minister Philpott went on to say that she hoped to be able to visit the community in the near future to see how the project is making a positive impact on the community and to tour the new homes recently built in Wiikwemkoong.

Mr. Manitowabi noted that the $1.1 million project was financed with $127,900 in contributions by the Save on Energy program and term debt through private financing. Mr. Manitowabi acknowledged the band’s financing partnership with TD Canada Trust, as well as the assistance of Hydro One and the suppliers and vendors, especially South Bay Electric for overseeing the installation of the upgrades.

Mr. Manitowabi acknowledged the leadership of Wiikwemkoong, the project team, management and staff in helping to make the project a reality.

A certificate highlighting the “4Es” of environment, energy, economic development and education was presented to Ogimaa Peltier by Mr. Manitowabi.

The second phase of the program will consist of further investments in infrastructure for energy efficiencies such as upgrading heating, ventilation and air conditioning (HVAC) systems, as well as building envelopes (aka windows, doors and insulation).

According to Mr. Manitowabi, Phase III will see a comprehensive residential rehabilitation program in partnership with IGNITE for the 1,200 residential units, with energy efficiency upgrades as well as other structural upgrades to enhance the useful life of the community’s housing stock.

IGNITE is a member driven infrastructure association based in Oakville that operates as a not-for-profit organization to manages the development, design, building, financing, operation and maintenance of the infrastructure assets that have been entrusted to its care by the members. Those members are First Nations and the so-called MUSH sector (municipalities, universities, school boards and hospitals, as well as long-term care homes, children’s aid societies and police services).

The IGNITE First Nations Sustainable Communities Program being launched at the celebration will be headquartered in Wiikwemkoong. IGNITE will be hiring and training First Nations members to manage and oversee the program as it is rolled out across Ontario and Canada.

Ontario Extends Business Closures to Stop the Spread of COVID-19