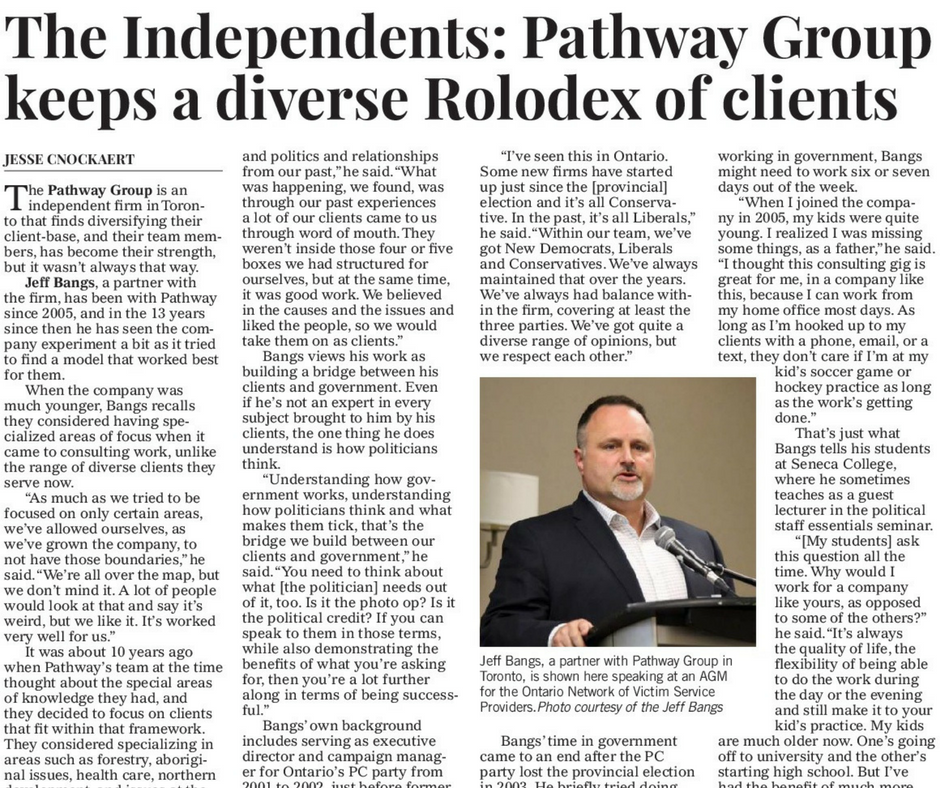 Jeff Bangs, Partner at Pathway Group, sits down with Jesse Cnockaert at the Lobby Monitor to talk about our business model and what makes our team stand out. Jeff explains how we play to our strengths, and why Pathway Group is such a great place to work.  This article is part of a series called: The Independents.

If you have a subscription to The Lobby Monitor, you can read the article here: Or scroll down to view the article.

The Independents: Pathway Group keeps a diverse Rolodex of clients

The Pathway Group is an independent firm in Toronto that finds diversifying their client-base, and their team members, has become their strength, but it wasn’t always that way.

Jeff Bangs, a partner with the firm, has been with Pathway since 2005, and in the 13 years since then he has seen the company experiment a bit as it tried to find a model that worked best for them.

When the company was much younger, Bangs recalls they considered having specialized areas of focus when it came to consulting work, unlike the range of diverse clients they serve now.

“As much as we tried to be focused on only certain areas, we’ve allowed ourselves, as we’ve grown the company, to not have those boundaries,” he said. “We’re all over the map, but we don’t mind it. A lot of people would look at that and say it’s weird, but we like it. It’s worked very well for us.”

It was about 10 years ago when Pathway’s team at the time thought about the special areas of knowledge they had, and they decided to focus on clients that fit within that framework. They considered specializing in areas such as forestry, aboriginal issues, health care, northern development, and issues at the municipal level.

This didn’t last because of what Bangs calls “the Rolodex of [their] careers.” The common thread among the team members at Pathway is they all have some political background, and the connections they made from those days proved too useful to leave behind.

“We tried [specializing] for a while and had some success, but the problem is we all have backgrounds in government and politics and relationships from our past,” he said. “What was happening, we found, was through our past experiences a lot of our clients came to us through word of mouth. They weren’t inside those four or five boxes we had structured for ourselves, but at the same time, it was good work. We believed in the causes and the issues and liked the people, so we would take them on as clients.”

Bangs views his work as building a bridge between his clients and government. Even if he’s not an expert in every subject brought to him by his clients, the one thing he does understand is how politicians think.

“Understanding how government works, understanding how politicians think and what makes them tick, that’s the bridge we build between our clients and government,” he said. “You need to think about what [the politician] needs out of it, too. Is it the photo op? Is it the political credit? If you can speak to them in those terms, while also demonstrating the benefits of what you’re asking for, then you’re a lot further along in terms of being successful.”

Bangs’ own background includes serving as executive director and campaign manager for Ontario’s PC party from 2001 to 2002, just before former premier Mike Harris stepped down. Bangs also was principal secretary to former Ontario premier Ernie Eves from 2002 to 2003, and he was chief of staff to Eves when he was minister of finance years earlier.

Another way Pathway keeps things diverse is in the political stripes of their staff, according to Bangs, unlike some firms that try to have staff members who match up with which party is leading Ontario.

“I’ve seen this in Ontario. Some new firms have started up just since the [provincial] election and it’s all Conservative. In the past, it’s all Liberals,” he said. “Within our team, we’ve got New Democrats, Liberals and Conservatives. We’ve always maintained that over the years. We’ve always had balance within the firm, covering at least the three parties. We’ve got quite a diverse range of opinions, but we respect each other.”

Bangs’ time in government came to an end after the PC party lost the provincial election in 2003. He briefly tried doing independent work until he found the team at Pathway, where he discovered his background in government could be a marketable commodity.

He then surprised himself by how long he’s stuck around.

A big part of the appeal for Bangs at the time was the flexible working hours. When he was working in government, Bangs might need to work six or seven days out of the week.

“When I joined the company in 2005, my kids were quite young. I realized I was missing some things, as a father,” he said. “I thought this consulting gig is great for me, in a company like this, because I can work from my home office most days. As long as I’m hooked up to my clients with a phone, email, or a text, they don’t care if I’m at my kid’s soccer game or hockey practice as long as the work’s getting done.”

That’s just what Bangs tells his students at Seneca College, where he sometimes teaches as a guest lecturer in the political staff essentials seminar.

“[My students] ask this question all the time. Why would I work for a company like yours, as opposed to some of the others?” he said. “It’s always the quality of life, the flexibility of being able to do the work during the day or the evening and still make it to your kid’s practice. My kids are much older now. One’s going off to university and the other’s starting high school. But I’ve had the benefit of much more time than I otherwise would have had if I’d stayed in government, or if I’d gone to work for a traditional bricks-and-mortar GR firm in downtown Toronto.”

Pathway Group is delighted to welcome Amanda Brodhagen to our team. Brodhagen will be working…

COVID-19: How Government Relations can help you navigate the global pandemic

It’s almost cliché to say that we are living in unprecedented times. COVID-19 has impacted…

What is Government Relations?

In Canada, having free and open access to government officials is a fundamental part of…